Book fairs of recent years have been somewhat changeable. They’re usually fun, they’re always hard work. Sometimes you don’t sell any books. Occasionally this doesn’t matter that much. Occasionally. One of my favourite Boston book fairs was commercially disasterous but featured, amongst other delights, a young librarian from Harvard being so overcome with excitement about the Tolkien letters I was showing her, that she began quoting great strings of his verse at me…in Elvish.

Such behaviour is nearly always going to make me all weepy with joy a) because I’m a  geek of quite cyclopean proportions and b) because you don’t truly love something until it has made you faintly, beautifully, endearingly ridiculous. This being the book trade, someone is bound to ask me whether she was declaiming in Quenya or Sindarin, which is yet another reason to love my job. 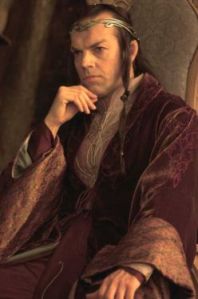 “Hmm, where did I put my copy of Fifty Shades of Grey, I wonder?”

Apart from meeting elves and buying and selling books, one of the great pleasures of book fairs is that I get to see people I consider my friends, even though I only get to meet them a few times a year. I very much look forward to staring in awe at Josh and Sunday from B&B, being intellectually intimidated by the crew from Bauman’s, terrified out of my wits by the walking renaissance that is Heather of Honey & Wax and being gently mocked by Cynthia Gibson. There is very little more fun than hanging out with both Paul and Stephen Foster, and the pinnacle of any book fair has to be attempting to drink the Dennii of First Folio underneath a table…just don’t ever try it with Melissa Sanders. A couple of times a year I get to goggle at the fearful symmetry of Justin Croft and Simon Beattie, the patrician splendor of Maggs Brothers and Quaritch and the unrelenting energy of Lucius Books. There’s a couple of hundred others as well, but you’re going to have to turn up to the next book fair to meet them. 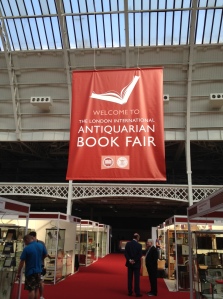 There was an almost constant stream of people staring at this saying; “How on earth did they get that up there?”

This year’s Olympia International Antiquarian Book Fair was all new and improved and shiny.

New venue: a giant glass ceilinged Victorian railway station kind of affair which admitted glorious amounts of light, and somewhat intimidating amounts of heat. In my frequently not very humble opinion it’s a big improvement on the old venue; everybody looks prettier in sunlight (well, nearly everybody) than under fluourescent  strips, it’s loads more airy and open and just more…bookish. It puts one in mind of a gallery rather than a trade show.

Heat, not too good for the books though, I now have a couple of vellum bindings that are never going to be quite the same again. The Paris book fair (with a similarly glass roofed venue although let’s be fair, their venue is the Grand Palais) suspends white muslin over the tops of the stands to keep off the heat. Just sayin’.

New Bosses: alright, still the Antiquarian Booksellers Association, but with a new committee in charge of organisation. Generally committees and antiquarian book-dealers go together extraordinarily badly, like icebergs and over-sized cruise liners with too many cheery, plucky steerage passengers and not enough lifeboats. Book-dealers are a calculatedly perverse breed, many of whom delight in their ability to remain in a group only long enough to be ejected from it for bad behaviour. In the same way that lions feed most easily near watering holes, book-dealers operate best in small groups in pubs and restaurants. 150 of them together in the same building can end up looking like a slowed down version of the school gym scene from West Side Story, only with more tweed, and smelling slightly of Germolene.

“Three boxes of A&C Black books, this big, missing from my Volvo. Tell me where they are or Pablo will cut you bad!”

The committee in charge this year did a sterling job, it has to be said. The atmosphere (at least the one projected) was calm and organised and really rather cheery.

Side Note: Both the Olympia and Chelsea ABA book fairs have organiser committees, but the common thread between them is a lady called Marianne  (whose role should probably be re-titled “Cat Herder Extraordinary”), who, along with other members of the ABA office probably frequently falls victim to the Newtonian concept of effluent travelling in a downwards motion. The success of a book fair can often be gauged by observing her. A lot can be learned from watching her hands…if they’re around someone’s neck, she’s probably displeased. A fair amount of the benefit gained from London’s two major antiquarian book-fairs can be credited to her involvement, along with able assistance from the rest of the ABA office.

Some of the highlights of the fair can be seen here. Including pictures of our very own Jon Gilbert and  his mammoth Ian Fleming Bibliography with Fergus Fleming; the James Bond creator’s nephew, who turned up at the fair to see how things were going.

And the official ABA response to the fair: here.

The dealer turnout was splendid, especially the number of notable continental dealers and a couple of very high profile US dealers we wouldn’t normally have seen exhibiting in recent years. It’s always a very good sign for a book fair when the foreign talent turns up. They bring books, opinions and gossip that we would otherwise not encounter, and their ways of dealing with and engaging customers often provide a nice contrast to our own. I think it shows a encouraging amount of confidence (or possibly bravado in the case of Between The Covers) in the current climate when dealers from as far afield as New Jersey and Baltimore are prepared to travel halfway around the world for something as potentially random and costly as a book fair. I mean, we buy them copious amounts of alcohol and tell them how wonderful they are, but I really don’t think that has anything to do with it.

Notable US bookdealers rapidly rethinking the wisdom of their journey.

The customer turnout was a little quieter than usual, possibly there were more of the serious collectors and fewer browsers than usual. In all likelihood because it was the first scorching hot weekend of the year.

It’s always nice to see our favorite customers, and it’s great when a serious bibliophile turns up and walks away with something truly splendid (an event which happened at least twice during this particular fair), it is however arguably more wonderful when someone who has previously only had a passing interest in old books, who perhaps wandered in out of nothing other than curiosity, realises that they have found their home and that haunting bookfairs and bookshops is going to be their primary vice henceforth.

My beloved customers know who I am, and where to find me (in the bar, naturally)…To them bookfairs are often more of a social event, they wander around, I give them a guided tour of what’s wonderful and beautiful (I must have showed Sokol Books’ Nuremberg Chronicle to 20 people, getting steadily more enthusiastic as the fair wore on), we grab a drink and they make an appointment to pop into the shop to have a look at what I’ve bought for them. That’s my job. It’s a really good job. I wish I were better at it, but I love doing it.

Sokol also had this Hypnerotomachia Polyphili tantalisingly on show. I could hear it calling to me throughout the course of the fair, asking me to take it up out of its glass cabinet and show it the world…Can you get a kickstarter for buying a book? Is that selfish?

What I also love doing is meeting the people who will be keeping the book trade alive over the next few decades. They turn up at a fair, ask delightfully infuriating questions, carry away a stack of bookseller’s catalogues, pick things up and gasp over them, stare fixedly into glass cabinets and spend £25 before going away as happy and awestruck as if they’d just purchased a signed Galileo first edition. They are what book fairs are for, in my (again) not very humble opinion. They know they love books, they don’t necessarily know which books, or how they would like to proceed with collecting them…they don’t know if they’re in love with Victorian children’s books, 1940’s pulps or medieval illuminated manuscripts. They aren’t going to know unless they see them, ask questions about them and touch them. It is our job, and in fact our livelihood, to assist in any way possible, to inform and educate and provide examples and resources and enable people to enter the world of rare books. I love people asking silly questions and giving vent to undignified squeals of enthusiasm when you show them something truly wonderful, it’s what is supposed to happen. Bookshops aren’t supposed to be places where people whisper, they are supposed to be places where people laugh and gasp and get excited. Book fairs doubly so.

Some booksellers have a tendency to treat such visitors as if they were small children caked in jam, or a kind of subsonic annoyance that gives them a headache. I find they are often the same booksellers who seem to relish uttering prophecies about the end of the book trade and how all the good books have gone, or all the good collectors have gone or things aren’t what they used to be and everything was better before the internet/telephones/women got the vote. Some booksellers are in line for a Darwin Award.

H.M. Fletcher Books, most definitely out of the running for the above award, had this:

This is the luminous Augusta Ada King (nee Byron, yes, that Lord Byron was her father), Countess of Lovelace, mathematician, visionary, something of a babe, and also the world’s first computer programmer.

The spirit of Ada Lovelace, complex algorithms and all, would like a quick word with the New York Times regarding their stance on a recent Silicon Valley discrimination lawsuit.

Ada will be getting a blog post all of her own as soon as the post book fair hangover has worn off. In the meantime, all giddy questions welcomed.